The recommended way to install Jenkins on macOS is through homebrew:

From now on start Jenkins by running:

To store the password in the Keychain of your remote machine, it is recommended that you run match or deliver using ssh or remote desktop at least once.

We recommend using rbenv for installing Ruby, though rvm and the version of Ruby that comes bundled on macOS are fine too.

If using a Gemfile in your project, add an "Execute shell" step as your first build step and call bundle update.

You'll find the following Jenkins plugins to be useful:

(note: We do not recommend installing the Xcode plugin)

Add an "Execute shell" build step using your appropriate fastlane command per the example below:

Replace appstore with the lane you want to use.

(note: if using a Gemfile, prefix that command with bundle exec)

You can use setup_jenkins action which integrates well with the Keychains and Provisioning Profiles Plugin. Selected keychain will be automatically unlocked and the selected code signing identity will be used. Also all build results, like IPA files, archives, dSYMs and result bundles will be stored in the ./output folder in the job workspace. In additions setup_jenkins will create separate derived data folder for each job (in the ./derivedData).

You can use commit_version_bump or git_commit action to commit changes to your repository in your fastlane setup. When you are using webhooks to trigger your build on a push this will cause an infinite loop of triggering builds.

When you are using Gitlab you will need the GitLab Plugin. Inside the job you want to configure you go to Build Triggers > Build when a change is pushed to GitLab > Enable [ci-skip]. When you include [ci-skip] in your build this commit won't trigger the build in jenkins at all.

To show the deployment result right in Jenkins

To show the generated screenshots right in Jenkins

Save and run. The result should look like this: 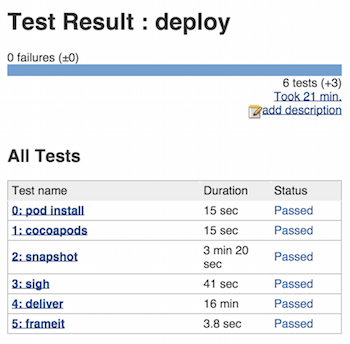